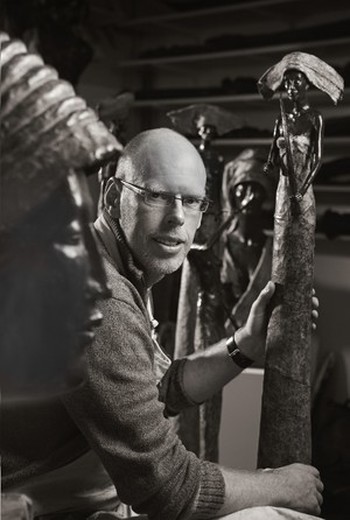 Other human beings have always been on this world; this fact intrigued Karel Zijlstra since his childhood. In thousands of years men and women developed from bestial creatures to spiritual human beings.

Lack of scientific knowledge made them believe in gods and miracles; life was explained and made bearable by storytelling. People joined in secret associations, searching the truth behind the harsh reality, preached by king and clergy.

Human evolution is the leading motive in Zijlstras work.

He was inspirated by the Celts, who came from eastern Europe through Holland, Scandinavia and England to Ireland. Like the upright Celtic dancer, Zijlstras statues reach out for elevation and spiritualization. His figures show no feet, they rize out of the misty Irish land like thin gods. Their spirituality makes them almost unassailable.

These slender, introverted figures are often compared with Masai warriors or Egyptian gods. Rightly, according to the artist. Because his quest for origin, genesis and future of mankind is universal and embraces all people and all cultures.

Karel Zijlstra studied at the Academy of Industrial Design in Eindhoven. Since 1989 he applied himself completely to sculpting. In this period he discovered Celtic and mediaeval literature. Till today the King Arthur legends, the Holy Grail and Percival and the Irish myths and legends inspire his seemingly weightless bronze figures.

Zijlstra's bronzes are modelled in wax and then cast in bronze in the lost wax method. (cire-perdue).

He lives and works on the island of Vlieland